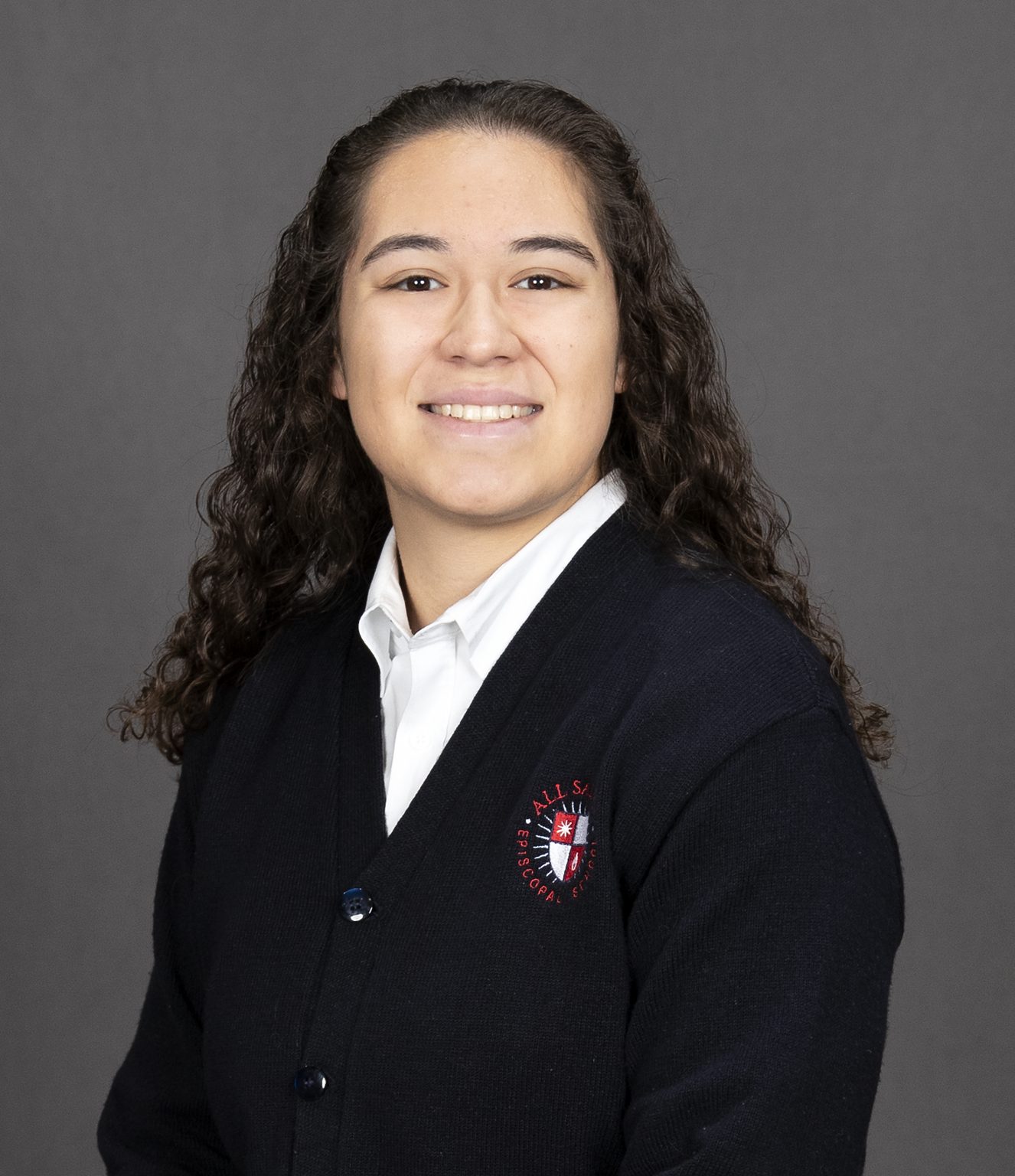 All Saints Episcopal School is proud to announce that a member of its 2022 graduating class is receiving honors by the College Board’s National Hispanic Scholar Recognition Program for her “Excellence in Academic Achievement” demonstrated by her outstanding performance on the qualifying 2020 Preliminary SAT/National Merit Scholarship Qualifying Test (PSAT/NMSQT) taken in October 2020.

Senior Mia Garza was named by the College Board as a Scholar in its National Hispanic Recognition Program (NHRP) in the 2022 National Merit Scholarship Program along with 5,000 academically outstanding Hispanic/Latino high school juniors who took the PSAT/NMSQT® their junior year. In order to be eligible, students must be at least one-quarter Hispanic.  Each year NHRP identifies approximately 7,000 of the highest-scoring students from a nationwide total of 250,000 high school juniors who took the PSAT/NMSQT and designated themselves as Hispanic. The nationwide selection also includes students from Puerto Rico, U.S. Virgin Islands, Guam, and U.S. citizens attending international and APO schools.

“We are so very proud of Mia being honored as a National Merit Hispanic Scholar. Mia is truly an outstanding young lady who represents herself and her family so well,” Head of School Robert Brashear said. “She is a shining light at All Saints and a true portrait of the type of person and student that we are surrounded by at All Saints.  Her future is bright, and she will always be someone for all to look to for example and guidance.”

“Mia is a quiet force of nature whose determination and drive stand out academically and in the areas of the fine arts that she participates in as a student at All Saints. Over the course of these four years in high school, Mia has accomplished a great deal while keeping a very busy schedule,” High School Division Head Tammy Edmonson said.  “Her recognition as a National Hispanic Scholar is a major achievement and a reflection of the academic rigor she has continued to maintain while in high school.”

Edmonson attributes part of Garza’s success to her teachers.  “Her accomplishments are also a reflection of the dedication and desire of the All Saints faculty to hold our students to a high standard on a daily basis,” she said.

“This mindset allows many of our students to have numerous opportunities related to academic and extracurricular success while at All Saints and beyond.”

Garza began her tenure at All Saints as a four-year-old Pre-Kindergarten student and has excelled in academics, athletics, and fine arts since her first day.  She began playing the cello as a nine-year-old student in the school’s Beginning Orchestra and has continued in the High School Orchestra now as the Principal Cello and Novice Double Bass player.  Garza has played in the Texas Music Educators Association (TMEA) All Region Orchestra and Texas Private School Music Educators Association (TPSMEA) All Region Orchestra and has earned Superior Ratings in the Texas Association of Private and Parochial Schools (TAPPS) State Solo and Ensemble contests.

She is a gifted graphic artist as well as a talented musician.  Garza was named as the TAPPS 2A State Champion in Digital Art last May (2021) and was a state qualifier the year before (2020).  She is also a member of the Varsity Basketball Team.

Garza is a member of the Sherry Fewin Chapter of the National Honor Society. She also serves on the school’s Honor Council in which teachers select three students from each high school grade to serve as members to help guide the student body to uphold the highest moral and academic standards.

“Mr. and Mrs. Garza have played a very integral part in Mia’s achievements through providing her with a challenging and nurturing learning environment to thrive,” Edmonson said. “Mia is the perfect example of the values of All Saints through her positive and engaging actions and her commitment to excellence.  All Saints is extremely blessed to have Mia represent the school in such a high honor.”

She is the daughter of Ricardo and Lily Garza.  Her brother, Nicholas Garza, graduated from Frenship Life Skills High School in 2017. Garza is a member of Trinity Fellowship Church. Her favorite Bible verse is Philippians 4:13 “I can do all things through Christ who strengthens me.”

“We are all thrilled that Mia Garza has been recognized by The College Board as a Scholar in their National Hispanic Recognition Program.  Mia is an incredible young woman who is so very deserving of this honor. She is a dedicated individual who possesses an extraordinary work ethic, is intrinsically motivated, and strives for success in all the activities which she undertakes,” All Saints Counselor Gwen Belk said. “Mia has a kind, generous, humble spirit.  She recognizes all the opportunities which All Saints has afforded her. Her love of learning, coupled with her worth ethic and dedication will continue to contribute to her future success.  Mia’s parents have also played a crucial role in her success.  Their constant and unwavering support of Mia has helped shape Mia into the exceptional young woman she has become.”

“I can say, without a doubt, that Mia has been an absolute pleasure to work with and All Saints is thrilled that we have played a small part in her success,” Belk said.

No comments to show.