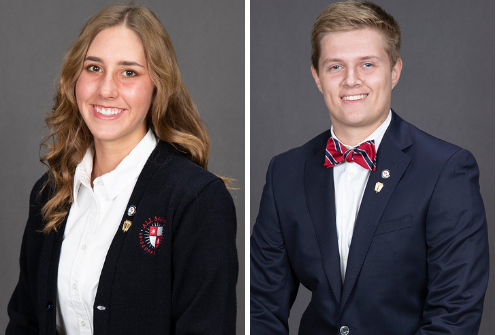 Two seniors were recognized recently as good citizens by local organizations for their outstanding leadership and volunteerism qualities.

Spencer Johnson was recognized by the Daughters of the American Revolution (DAR) while Ashby Whitaker was honored by the YWCA.

Senior Spencer Johnson was awarded the Nancy Anderson Chapter of the Daughters of the American Revolution (DAR) 2022 Good Citizen of the Year Award.
He is a member of the school’s National Honor Society, Mock Trial, band, jazz band, and is a Student Council Officer, and plays on the football, basketball, track and field, and tennis teams . He was selected as the 2021 Homecoming King and named a Mock Trial Outstanding Witness at the 2022 Regional Mock Trial Competition. When not at school, Johnson helps the Audio Visual team at St. Stephen’s Episcopal Church.

Johnson plans to attend either Texas Christian University (TCU) or the University of Arkansas to study business management and finance. His parents are Ali and Shawn Johnson. His sister, Elizabeth, is a freshman at All Saints.

Whitaker is undecided which college she will attend but does plan to major in International Relations and attend law school. She is the daughter of Dana and Jeff Whitaker. Her brother, Sebastian, is a 2021 All Saints graduate and is enrolled at the University of Notre Dame.

No comments to show.