The 1950s:  All Saints Episcopal School was founded as St. Christopher’s Episcopal School in 1956 by several community leaders who were seeking to provide a quality private school opportunity for the Lubbock community. An accelerated and enriched educational program was needed in Lubbock to meet the needs of children. The school opened, offering a Preschool and Kindergarten program.

Although the school used the name “St. Christopher’s” and used the church’s property, it was not a part of the parish. First grade was added in the fall of 1958. In the fall of 1959, classes were offered through the third grade.

The 1960s:  Early in 1960, the status of the school changed when the vestry of St. Christopher’s Church voted to include the school as part of the church.

The fourth, fifth, and sixth grades were added in consecutive years from 1961 through 1963. The first sixth grade graduation was held in 1963.

In the 1980s and the 1990s:  Faced with limited space for the student body, a capital campaign was undertaken for All Saints to build its own facility. The school moved into a rented facility in September 1980 and remained there until September 1984, when it moved to its 53-acre campus located at 3222 103rd Street. Grades 7-9 were added when the school moved to its new facility. The school remains at this location today with additional building spaces and upgraded facilities.

Throughout the 1980s and 1990s, All Saints enjoyed a successful era and became a thriving community of teachers, parents, and students. The academic standard of All Saints’ original founders remained intact. However, as the school has matured and developed over the years, it has grown its program to allow paths for diversified, creative, individual expression. The addition of extracurricular activities, including a fine arts program featuring cultural offerings in orchestra, band, choir, studio art, and theatre, and an athletic program that competes in basketball, volleyball, football, track, golf, and tennis, has offered new ways for students to enjoy self-fulfillment.

The early 2000s:  During the early 2000s, a new football field and field house were donated, swimming and tennis became strong sports, and the fine arts programs continued to prosper, including orchestra, band, and choir. A new play structure was added to the Lower School play area on the east side of the campus, and a recreational area including an outdoor basketball court and two sand volleyball courts were added for the Middle School students.

In 2005:  Dr. Mike Bennett began leading the school in June 2005 and took the school to a new level. Enrollment increased each year, academics remained at the forefront, and planning for the future of the school takes top priority. Dr. Bennett offered a strong proponent of development and fundraising. He created the Office of Institutional Advancement, which is responsible for establishing resources for the school outside the operations budget.

In 2007:  The Advancement Office began an endowment campaign that endowed teacher salaries, scholarships, and facility operations.

In 2011:  The Board of Trustees voted to begin a Capital Campaign to raise money for new and expanded facilities that included space for high school classrooms. In November, the Board voted to add grades nine through twelve in successive years beginning in the Fall of 2012.

In 2012:  High School at All Saints opened its doors with its first students and a 52,000 square foot high school addition and 13,000 square feet of renovations to the existing campus, which included spaces for all of the students including the high school, Fine Arts Center, administrative offices, Patriot Gym, and Kirby Commons at a cost of $11.1 million.

In 2020:  The Suzan Collins Headrick Center opened for classes in the fall of 2020.  This expansion project brought both a renovation to the current middle school and a two-story addition that included more classrooms and Science and Robotics labs. Named in memory of a beloved parent and friend of the school, this expansion included new programming to bring instruction in technology and robotics to students at all levels along with improvements to the athletic facilities.

In its 60+ years, All Saints has grown from a small preschool/kindergarten school with 20 students housed inside a church in 1956 into a campus that houses around 500 students on 53 acres for preschool through 12th grade students in 2022. The school is widely known for its academic excellence and fine arts curricula as well as its high-achieving athletic programs throughout all grade levels.

As grandparents and past parents, we know the value of an All Saints education. We are thrilled for the next generation of our family to attend All Saints.

Andrea and Jorge Hernandez
All Saints Grandparents
As an All Saints faculty member and grandparent, I've seen firsthand the difference generosity and love make in the lives of our students. Those who give, grace our staff with confidence in our school and allow our children to soar! 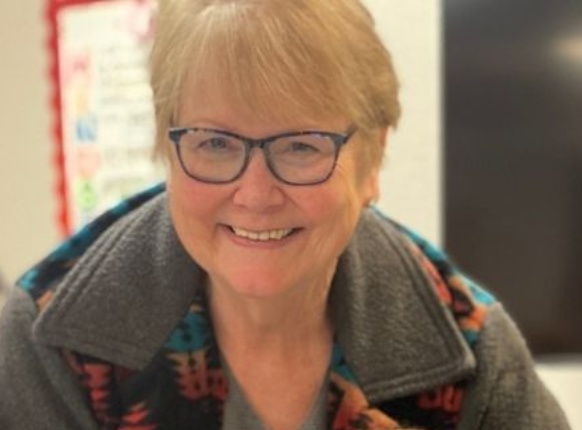 Nancy Cooper
Middle School English Teacher | All Saints Grandparent
Giving to All Saints is a natural way to show appreciation for all the blessings we have received from being a part of the All Saints community.